When my techiest friend Chris told me about two 3D-printed dresses being showcased at this year’s Paris Fashion Week, I couldn’t believe it. With recent talks of 3D-printed meat, of course it was only going to be a matter of time, but already? Could it be…?

He was right. The two extraordinary outfits were included by Dutch designer Iris van Herpen in her Haute Couture show ‘Voltage’. The first piece was made of a metallic-look, encrusted skirt and a cape, which were created with the artist, architect, designer and Professor Neri Oxman from MIT’s Media Lab and printed by Stratasys using their unique Objet Connex. According to the designer, she decided to collaborate with Oxman after seeing her ‘Imaginary Beings: Mythologies of the Not Yet’ collection 3D-printed and exhibited at the Centre Pompidou last spring. Oxman explains that, as opposed to the previous printed pieces, “for this collection it was important to think not only about forms and materials, but also movement and wearability. This inspired us to design algorithms that could map physical movements and material behaviour to geometrical form and morphological variation in a seamless and continuous wearable surface. This allowed both hard and soft materials to be incorporated within the design, crucial to the movement and texture of the piece. The ability to vary softness and elasticity inspired us to design a “second skin” for the body acting as armour-in-motion; in this way we were able to design not only the garment’s form but also its motion,” explains Oxman. “The incredible possibilities afforded by these new technologies allowed us to reinterpret the tradition of couture as “tech-couture” where delicate hand-made embroidery and needlework is replaced by code”. 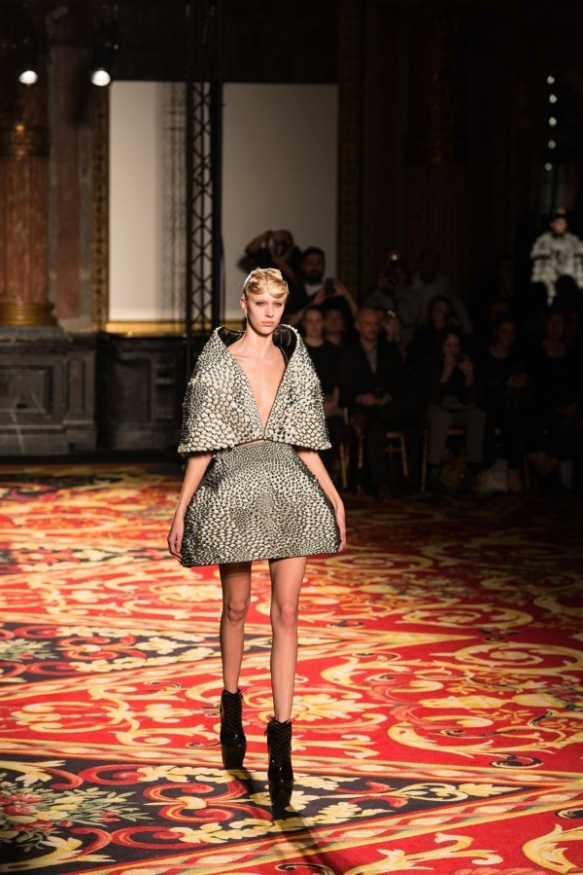 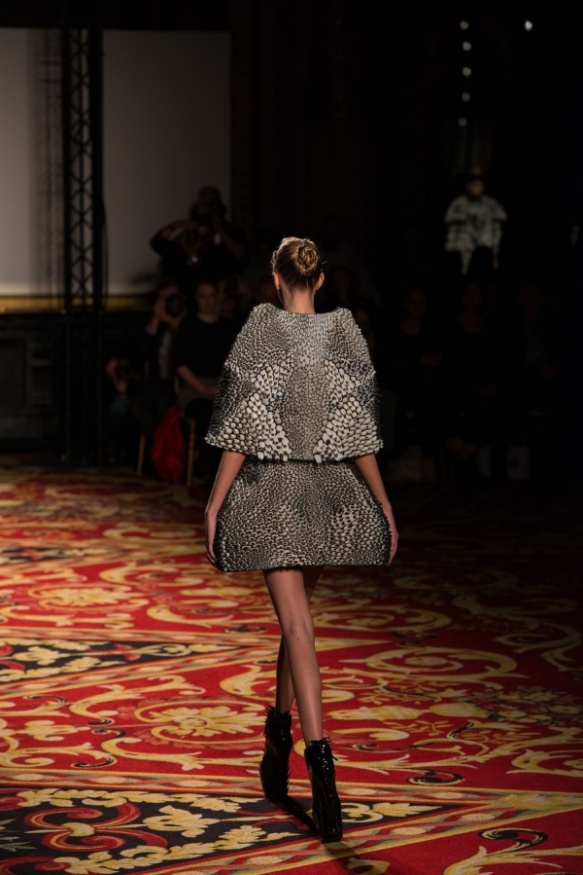 The second outfit was a very intricate, stunning black mini dress (which I’d love to wear!) designed with Austrian architect Julia Koerner and 3D-printed by Materialise, a Belgian-based pioneer in Additive Manufacturing software and solutions. Van Herpen, Koerner and Materialise carried out incessant 3D testing, proving that when fashion and high technology meet, normal rules don’t always apply. An experimental new material was finally utilised on this dress to create a flexible, soft and highly complex piece. The only way to achieve the piece’s intricate lace-like texture was to create it with precision by lasers. Julia Koerner explains, “The architectural structure of the dress aims to superimpose multiple layers of thin woven lines which animate the body in an organic way. New possibilities arise such as eliminating seams and cuts where they are usually placed in couture”. 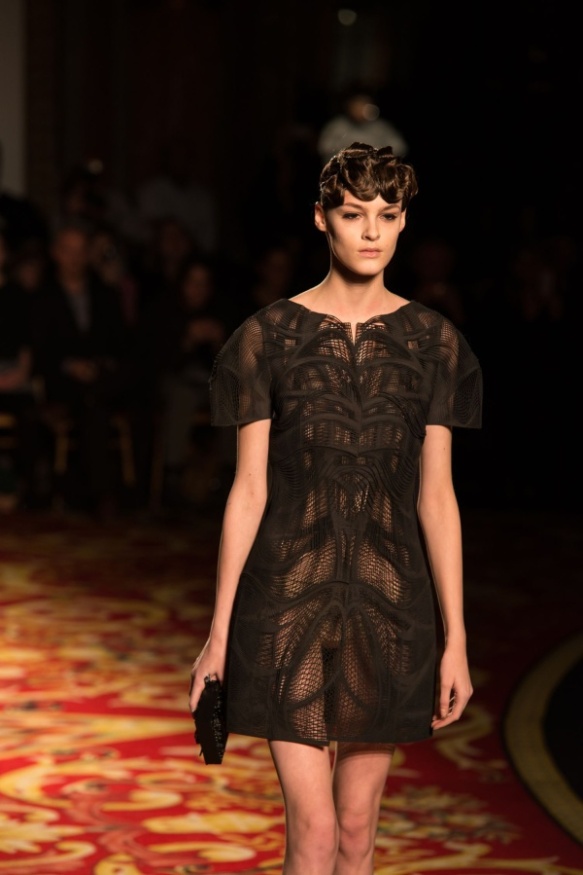 About her creations, Van Herpen said: “I feel it’s important that fashion can be about much more than consumerism, but also about new beginnings and self-expression, so my work very much comes from abstract ideas and using new techniques, not the re-invention of old ideas. I find the process of 3D printing fascinating because I believe it will only be a matter of time before we see the clothing we wear today produced with this technology, and it’s because it’s such a different way of manufacturing, adding layer-by-layer, it will be a great source of inspiration for new ideas”. 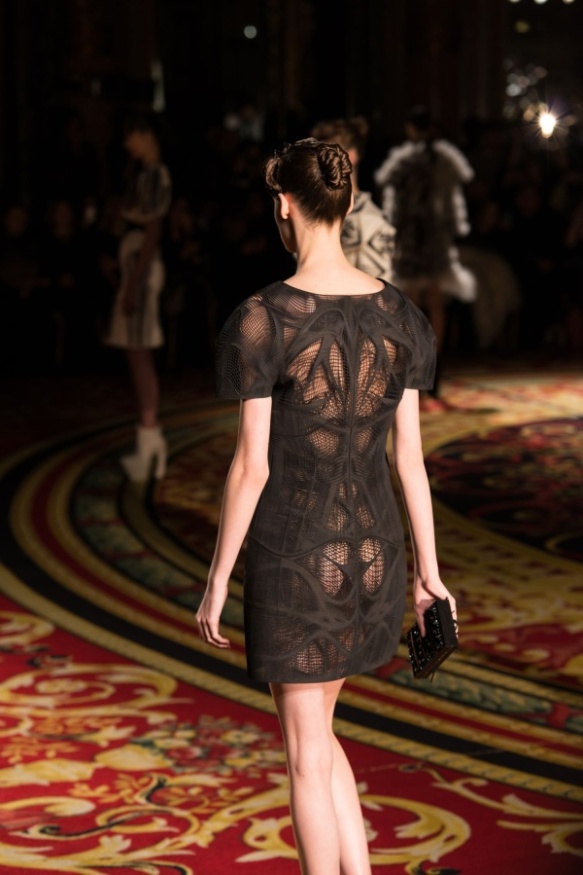 The whole of this 11-piece collection, however, is incredible. Its main concept is to explore the electricity of the body, and the reviews of her show were raving about the wonderful spectacle that unfolded before the attendees’ eyes. From the designer’s website: “Experimenting with its use in the field of creation, this collection seeks to portray its tangible movement and power. This ability of light and electricity to change states and bodies is reproduced using the most innovative technologies. Described as an alchemist approach to fashion, Van Herpen’s designs perpetually embrace new collaborations with artists, architects and researchers. As part of the show she collaborated with New Zealand artist Carlos Van Camp, echoing his notion of controlling high voltage electricity and its interaction with the human body. Van Camp experiments with three million volts running through bodies”.

Iris Van Herpen graduated from the Artez Institute of Arts in Arnhem, Netherlands in 2006 and, soon after, began her career as an intern with Alexander McQueen, before launching her eponymous brand in 2007. Her unique and avant-garde sense of style has drawn attention from the most sought-out publications in the industry. Iris’ recognition reached its climax in 2011 when she became a member of the exclusive French Trade Association of Haute Couture (Chambre Syndical de la Haute Couture). She developed her personal signature and style by focusing on craftsmanships involving a high level of handwork and demiurgic techniques. Her style combines creative inspirations in design with innovative constituents. Iris uses a combination of materials such as polyamide, metal, leathers, acrylic and synthetic yarns, which guarantees an astonishing visual impact. Iris considers fashion as a form of self-expression and her research is applied to the possibilities of fashion’s future.

Following the Paris Fashion Week Show, the skirt and cape will be exhibited at MIT’s Media Lab.