I am a great fan of J.Crew, so as soon as I heard that they were having a flash pop-up store event in London on the 24 and 25 May, I immediately put it in my diary. J.Crew’s highly anticipated opening in the UK in autumn 2013 was made even more exciting by the subtle but nonetheless definite hype of this event, which took place at the Western Transit Shed, an eclectically dressed urban warehouse conversion just a stone’s throw from King’s Cross Station,  to sample J.Crew’s new range, take a few snaps and generally be a bit nosey. 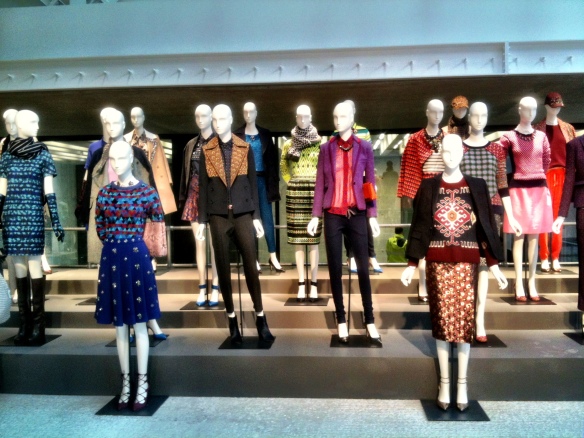 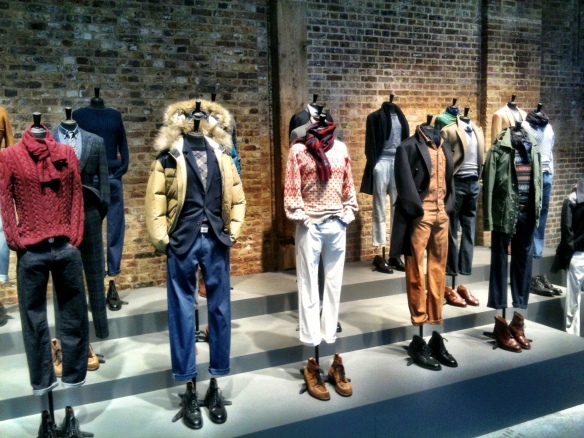 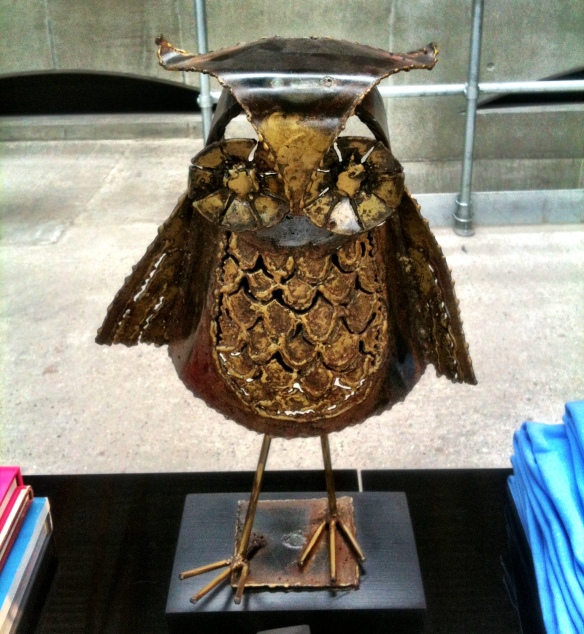 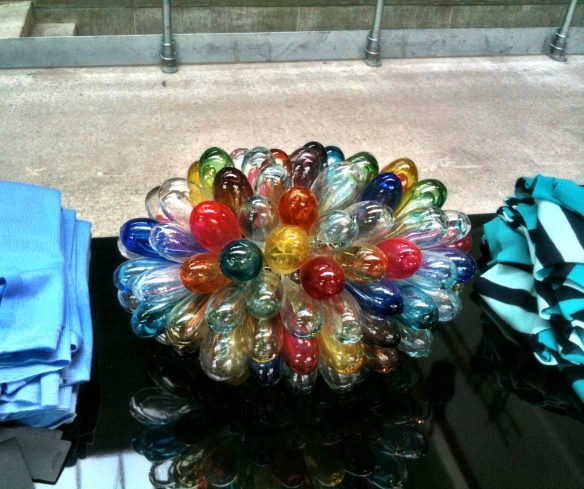 On display were a dozen or so key looks from the upcoming Fall/Winter collection. The most prominent new trends were woolly print-on-prints, beautifully intricate gem-filled jewellery, Aztec prints, embroidery on clean-cut heavy-weight blazers, and brocade and geometric patterns. The exquisite wool and cashmere pieces modelled clean and simple lines, and were well complemented by the busy Central American prints. For men, there were work boots, puff coats and furry hoodies. 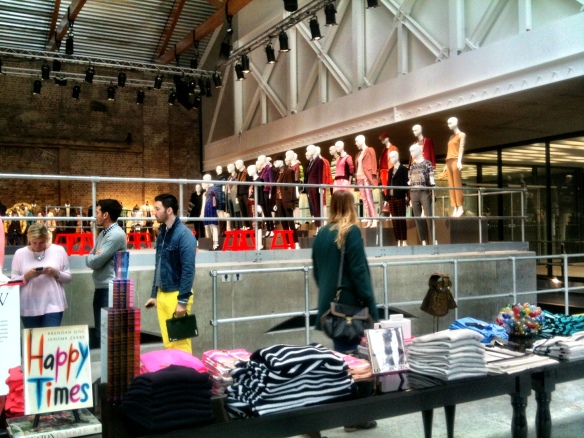 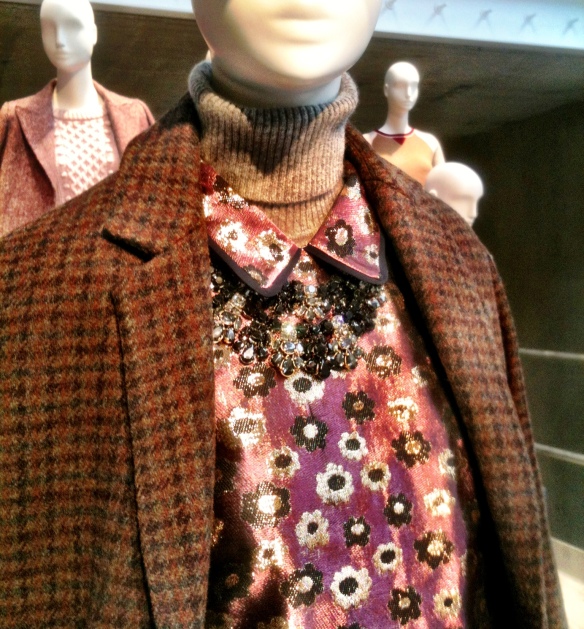 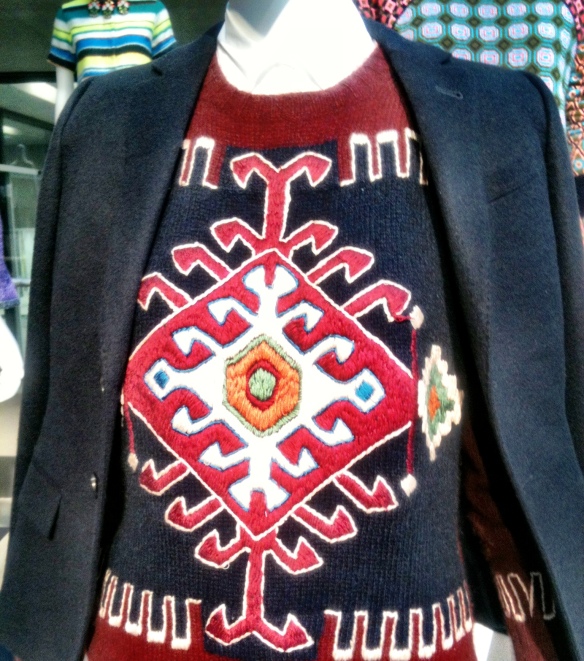 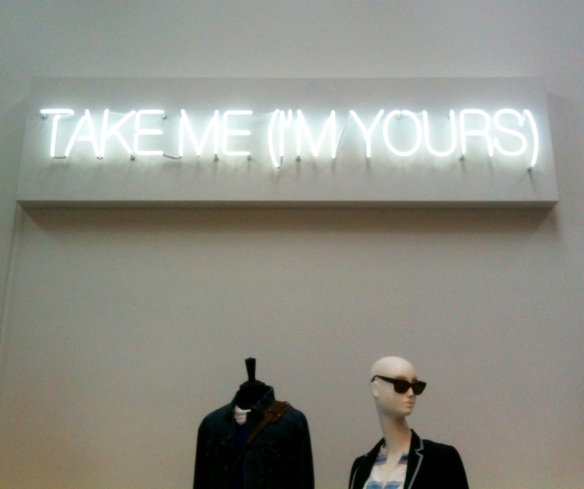 The only pieces actually available for sale were their classic cashmeres – in a small selection of colours.  They also provided personalised monogramming, which won’t be available on the UK website, and customised, handmade collars to be worn on t-shirts. Sadly, they had run out of my size in the navy cashmere, but I’ll make sure to buy it online and perhaps try my luck and have it monogrammed at the Regent Street shop once it opens in the autumn. 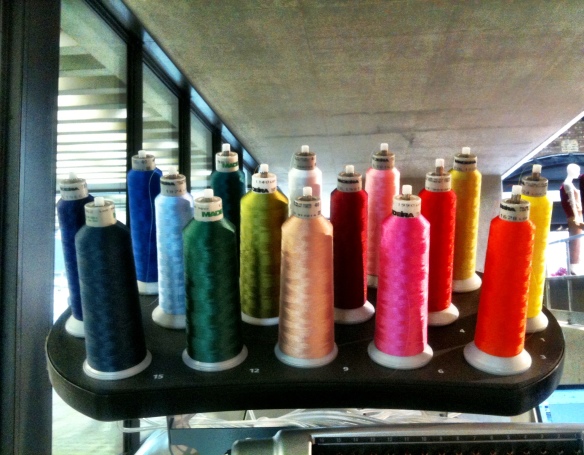 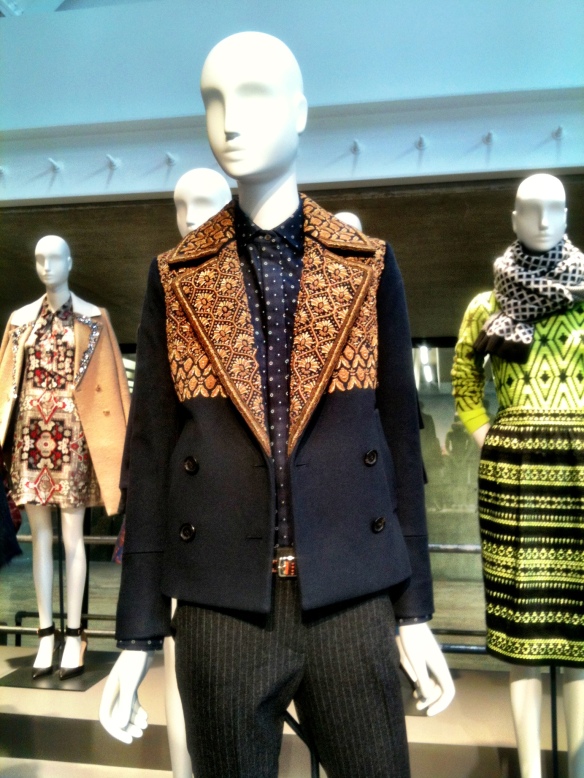 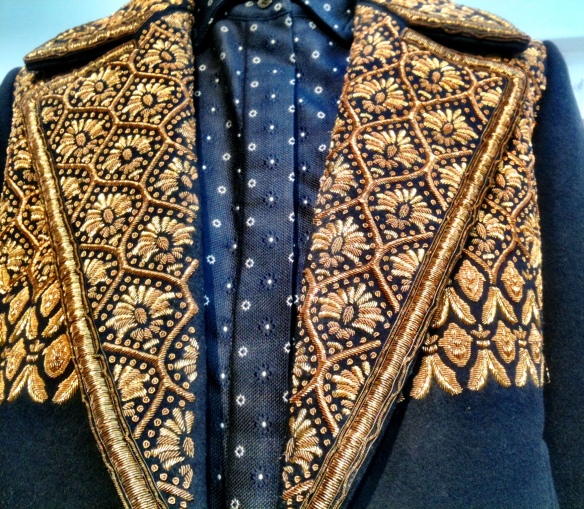 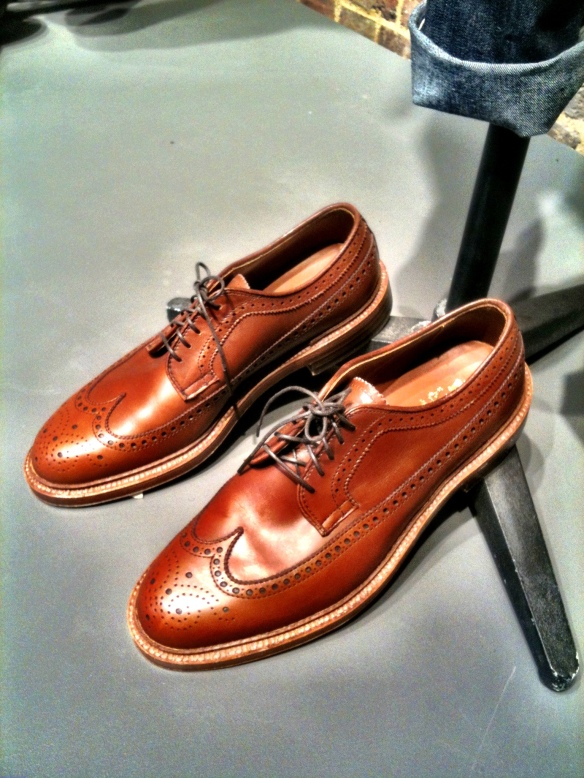 Orange is the first colour I ever remember someone disliking. I was seven or eight, not yet into black, and I was surprised to hear my mother say she found orange-coloured things repulsive. I hadn’t imagined people could dislike colours. I mean, sure, it made a kind of sense: I certainly knew which foods I disliked, for example; it just hadn’t occurred to me that colours were up for discussion. I knew I liked tigers, and that they were mostly orange. It was an earthquake of a moment. 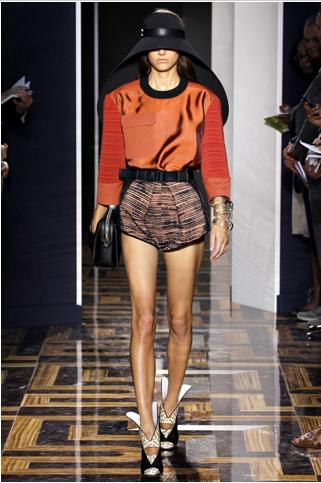 My mother, like all mothers, was half-right. Orange mixes its messages. It’s both warning and invitation. It has connotations of illness, of plague, of those glistening little rainforest dart frogs that exude poisonous syrups – and yet think of apricots, the nudity of peaches, the juice of tangerines and of, well, oranges. It’s sweet, is what I’m getting at, with all the sin and danger that word implies. 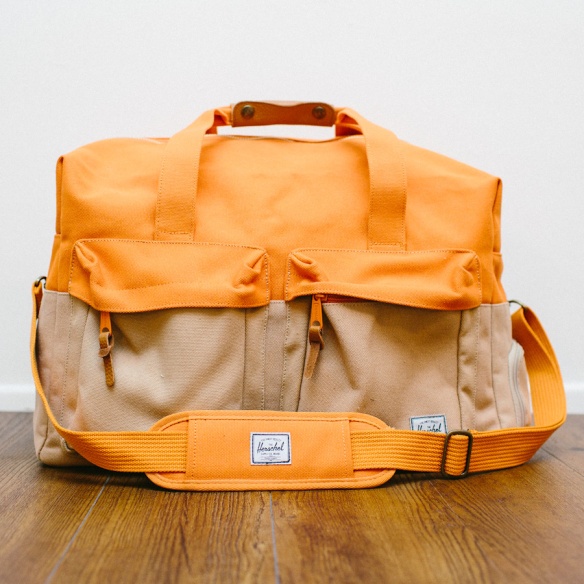 But we’re talking blaze orange here. Saturated safety orange. The colour of road cones and the Plymouth Barracuda. The colour of easyJet aeroplanes and the mobile phone company. That bright, toxic, new-basketball orange. The shade of deer-can’t-see-it orange you’d find in a hunting store. It’s the colour of autumn, of change – halfway between the self-sure reds and yellows of this world, it’s the colour of construction, of caution on building sites. Primordial, volcanic. Of something not yet fully made-up. A Halloween melding of this world and the other. 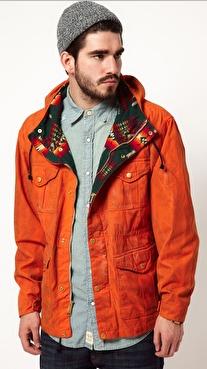 It’s a colour that’s been creeping up slowly. Oriental. Creeping onto shoes and bags, Sartorialist posts, the floor of Prada’s Men’s Fall/Winter 2012. It demands attention and works well with black, white, or dark brown. With leather. With wool. It’s one of the few colours – purple’s another – that asks something of the wearer. It confers a kind of power, a double-edged radiance you would do well to respect, and, like Alice Walker says of purple, I think it pisses God off if you walk by it and don’t notice. 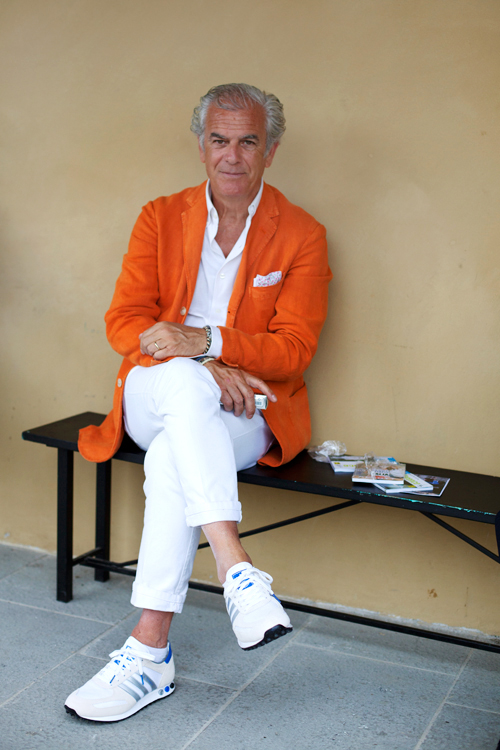 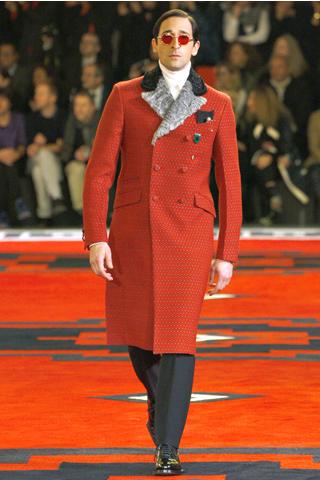 Do not wear more than one orange item. That one thing should be protective or functional rather than decorative, i.e., a coat, a hat, a tie, or shoes/boots. Don’t wear it with green. Don’t wear bow-ties. Don’t live alone. 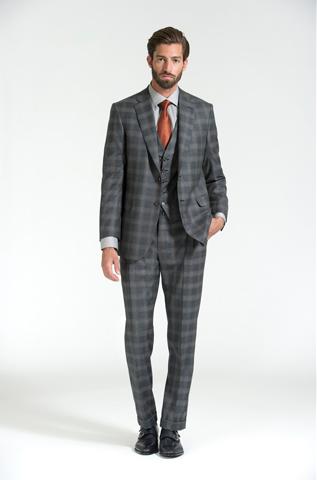 *This article was written by my friend and colleague Sam Eckett, press release editor and writer with a unique sense of style and a passion for all things beautiful.

This year has seen a rebirth of the Femme Fatale and a sudden rise in the 1940s’ trend. Vamping it up and adding va-va-voom are de rigueur to stand out in the approaching winter months. 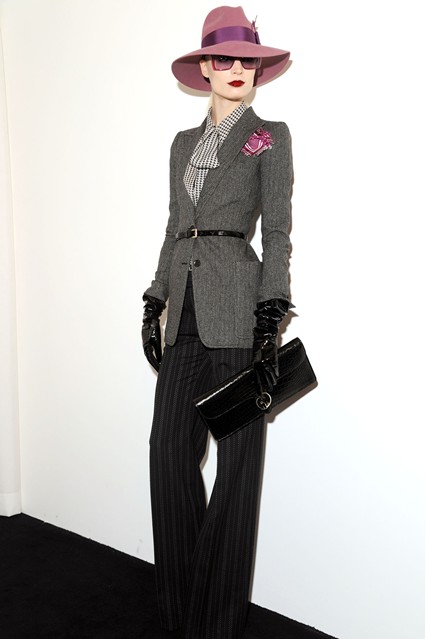 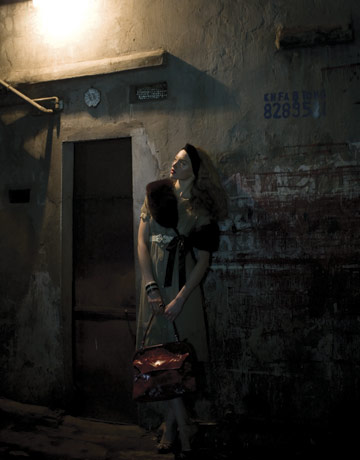 Of course this trend spans over 10 years of fashion history, and, as such, it has different influences, particularly originated from the circumstances due to World War II. At the beginning of the decade, with most countries being crippled by the poverty dictated by the international conflict, the hems went up to use less fabric and the shapes became more relaxed as women needed looser, more comfortable clothing in order to move and work. But by the end of the decade, women were tired of the figurative and practical cuts caused by warfare, and in 1947 Christian Dior introduced his New Look Collection (term coined by the American fashion-magazine editor Carmel Snow), which featured extra full skirts, tiny wasp waists and sloping shoulders, in contrast to the squared, military shoulders that were in use at the beginning of the decade. The skirt became longer in contrast to the early ‘40s (twelve inches or less from the ground), sustained by a taffeta petticoat. 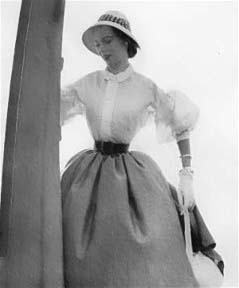 Current designers have put together both sides of the ‘40s and adopted the full skirt as long as the slim-fit one. Built-in support is key to this style, a feature that is still present two decades later, as showcased in Mad Men. This winter, colours are going back to the Forties too, seeing deep burgundy, bottle green, mustard and rich browns on the main palette. At the same time, also other, more daring shades are introduced, such as shocking pink, bright red and lilac, to modernise this vintage look. 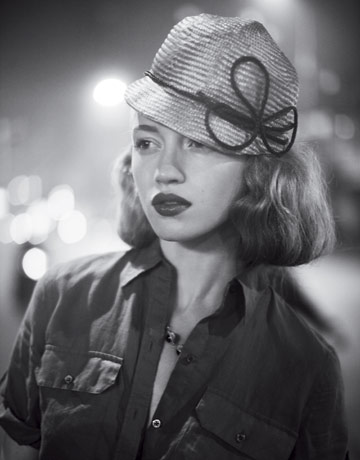 An endless list of designers, including Frida Giannini at Gucci, Miuccia Prada, Jean Paul Gaultier and Donna Karan have dipped into Forties glamour, adding furs, pearls, gloves and shrugs as final touches and, of course, including both styles of midi skirts. This trend is wonderful for complimenting womanly figures and creating curves, and is very flattering on pretty much all shapes and forms. Wear it with chunky, platform Mary Janes, leather inserts in skirts and blouses and long hair falling on your shoulders to keep it fresh and updated. 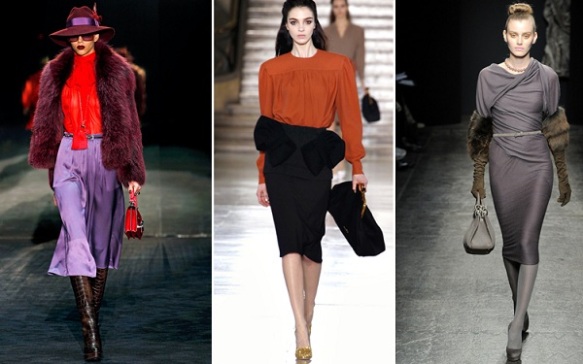